The Sincerest Form of Flattery

Raven Software's Singularity is technically an original IP. But playing through the game, as I did this week, it's difficult to call it anything other than pastiche.

That doesn't mean I didn't enjoy it, of course. For a paint-by-numbers FPS, it was entertaining enough, with some nifty animations and satisfying, if unoriginal, action. It was quick and fun and utterly familiar, a Hershey's Kiss of a game.

What should be unique about Singularity is its core mechanic: manipulating time. The setup in brief: Your American soldier, abandoned in 2010 on a Russian island home to a secret experimental facility that went supernova back in the mid-50s, acquires a Time Manipulation Device (TMD), powered by unobtanium E99, a mysterious element found only on the island. With this Power Glove he can age or "revert" objects, people, and the requisite vestigial mutants inhabiting the facility. Fire at a soldier, for example, and he'll age to dust before your eyes.

The TMD is also handy for solving environmental puzzles, which are generally so simple and repetitive as to be laughable. Revert a collapsed crate to its unbroken state and use it to jump up to the ledge above you. Collapse the crate again, grab it using the TMD's gravity-manipulation power, and squeeze it through a small crevice so you can use it in the next room. Rinse and repeat.

The problem, as I'm sure every review has pointed out, is that the TMD only works on certain highlighted objects. That makes sense - you wouldn't want to fall through the floor every time you accidentally tapped the bumper - but it does lead to some incredibly constrained puzzle design. If I was stumped for more than a few seconds at any point during Singularity, I don't recall it. The level design is not so much bad as just remarkably uninspired. The ability to manipulate time should be a selling point, allowing the player a wealth of creative opportunities. Instead we get the same tired set of interactions over and over. So I suppose time is being manipulated, in the same way it was for Bill Murray in Groundhog Day.

Naturally, you'll do your share of time-traveling throughout the course of the B-movie story, and there are a few neat little setpieces along the way. Nothing that'll make your brain hurt, but some cool, if way too familiar, sci-fi flourishes.

That's the thing that defines Singularity: like Bill Murray's bedraggled weatherman, we can't help feeling like we've been here before. And with good reason: Singularity steals from other recent high-profile games with such brazenness and regularity that it's actually quite endearing. It's so obvious about its thievery that in a few instances, it even confused Mrs. JPG into thinking I was playing a different game.

There's the ghostly figures echoing through time, for example, 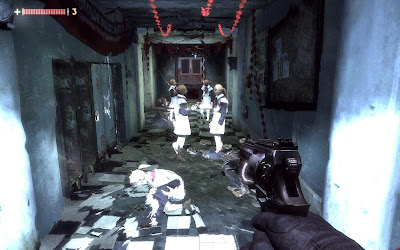 which are reminiscent of the "bleeding effect" between Desmond and Ezio in Assassin's Creed II. And even casual observers can see the similarities between "time rifts" in Singularity and the orange portals from a certain Valve blockbuster: 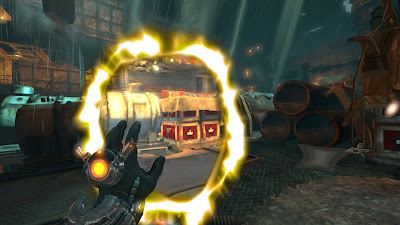 They even use light blue and orange as visual cues for reversion and aging on the targeting reticule. You know, like a certain Aperture Science Handheld Device? 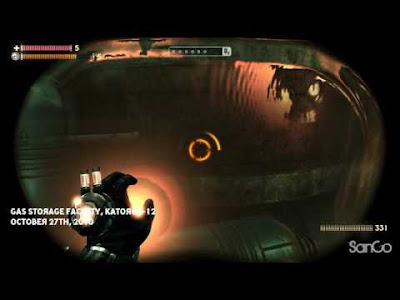 Of course, there's the question of how much of the theft was intentional. I don't know a thing about Singularity's development cycle. It's possible none of these elements were purposefully nicked, but given the very obvious Borat reference found in a late level, I doubt the designers weren't aware of what they were doing. To quote my favorite composer, Igor Stravinsky, "Good composers borrow. Great composers steal."

I happen to like pastiche every so often. Maybe there's some part of me that craves the familiarity of the known quantity. There's something oddly comforting about Singularity in that way; you know it's retreading the trodden path, but it's nice to find yourself in familiar surroundings.

Below I've collected some of Singularity's more egregious and enjoyable thieveries. What else have I forgotten? Let me know in the comments.